This page describes my amateur repairs on my Uxbridge Cabinet organ. Perhaps it will be useful to someone else.

The Uxbridge Cabinet Organ Factory located in Uxbridge Ontario, just north of Toronto, was created in 1873 by Irish-born cabinet maker John McGuire. McGuire had lived in Uxbridge with his wife Mary Ann (born in England) and his brother William since at least 1861. Their endeavour was helped by the presence of a water-powered sawmill, run by Richard Bell, and the arrival of the Toronto and Nipissing Railway in 1871. The company specialized in organs, cabinets, and coffins during its early years. It started making pianos and would be renamed the Uxbridge Piano and Organ Company, probably by 1889 when the local paper wrote of its “first piano.” According to the 1891 Census, McGuire and his wife Mary Ann had 8 children and he employed 64 people in his factory. By 1890 he opened a store in Toronto, and in 1891 he resigned from manufacturing to retail furniture and musical instruments. Various other leaders including Rueben P. Harman and Charles Small, kept it going between 1891 and 1900, and in the mid-1890s the workers formed a cooperative. The town offered it a deal on unpaid taxes, and by 1899, the local paper reported that it was again thriving, selling instruments throughout Canada. However, an economic downturn and a fire put the company out of business by 1912.  Alas all the company records were lost in that fire. More information can be found at the Uxbridge Historical Centre 7239 Concession Road 6, Uxbridge, ON L9P 1N5 and in the town history by J. Peter Hvidten (esp. p. 40, 85, 99, 100).

I found my organ in 2011 at an antique dealer in Lac-Mégantic Quebec, where I have had a chalet for many years. He claimed it had served at the local church, either St. Agnes or Fatima, but I cannot confirm that. It seemed to be in pretty good shape–most of the keys sounded, the pedals and bellows worked. It was very dirty, some white mold was on the back cover, and the stops and some keys were sticky. On the back was stamped a number #8616. Unfortunately I have found no year on the organ, and with all the records lost, I cannot date it. It is prior to 1902 as the Reed Organ Society database shows a 1902 instrument with the name Uxbridge Piano and Organ.

I was hoping that all it would need is some cleaning and TLC. The only tools I have needed so far are a flat-head screwdriver, a reed hook, and a drill for only one thing (far below).

I removed the back. From there I could see mutes covering the reeds, the top of wind chest, and the bellows and springs. This organ has only two banks of reeds, and it does not have a vox humana or a sub bass.

Another number (#8347) and a name (R. Dales) were stamped on the top of the wind chest (where the white paper is in the photo above). Richard Dale [sic] and wife “Malinda” Bell (daughter of the sawmiller) appear in the 1881 Canada Census for Uxbridge with one daughter Lillian age 2; his occupation given as “organ maker.” The couple had married in 1875. The 1891 Canada Census for the town of Uxbridge (p. 16-17) again lists “action maker” Richard Dales age 42 and his wife ‘Malinda’ age 33 and three daughters Lily May, Cora Bell, and Lena ages 12, 7, and 4. An action maker is “a general term covering all workers engaged in any process of making or assembling piano or organ actions or parts thereof” (Dictionary of occupational terms, 1921). In 1901 the family appears again with a son Lyman age 9 but without Cora; Dales is employed 12 months a year at the organ factory for an annual wage of $600. In 1911 the family has moved to Toronto at 57 Riverdale with Cora back as a milliner and Dales still employed as a “pianoforte maker,” though perhaps no longer with the Uxbridge company. A rough estimate for the date of my organ is early 1880s.

Next I removed the keyboard cover which was hiding most of the action. On this organ, it is round, a quarter circle, and it rotates down over the keys; on others it is often a flat board. I discovered that it was attached to two wooden paddles, one each side, that effectively formed “hinges,” rotating over a bar. Two screws hold the cover to each  paddle.

Easy enough to remove the keyboard cover. But oh oh! it had been rubbing on a decorative, horizontal wooden panel at the front above the keys. (I’m sure it has a name but I don’t know what it is.) That panel sat above the stops and was held in place with three vertical dowels sunk into the frame of the stop action. The dowels had been screwed to back of the panel, through the fabric. Two of the dowels were broken and would need to be replaced. (more about that and photos below**).

I also removed the key slip — which is the decorative panel under the key board that hides the reeds.

With the back and keyboard cover off, and the key slip and decorative panel removed, I was able to get at the old musty fabric. First thing I did was replace all the fabric (that’s when I found out it had once been blue). Red cotton broadcloth does the trick. It looks much better already.

With the key slip removed you can see the front reeds sitting sweetly in their cells. The front and back reeds sit on top of the wind chest, under each is a hole into the wind chest that is opened and closed by a valve inside the wind chest. To get at the reeds, you have to raise the mutes (wooden flaps that hide the reeds), holding them up with a little block of something.

Each reed has a little groove on the top surface at outer edge for you to insert a reed hook. I have modified a reed hook out of a wire coat hanger by bending the tip into a short, sharp right angle. With the hook inserted in the groove, pull gently straight (NOT ON AN ANGLE or you might damage the reed cell!!), and the reed will slide out. It always amazes me how snug is the fit between reeds and cells even after more than a century.

The sound comes from the tongue of the reed vibrating in the air flow through the wind chest created by the bellows. The underside of the reed is concave around the tongue. If you hold the reed up to a window or lamp, you should see light all the way around the tongue. Sometimes you will see tiny little particles or dirt blocking the light– and those wee specks are sufficient to stop the reed from vibrating. Often all you need to do is gently wipe or blow on the reed and the sound will be restored.

So now all the notes sounded nicely, but five years later, the sticky keys got up to mischief. One key dropped and would not spring back up– and sounded constantly when the pedals were pumped because its valve was permanently open. In the short term, I simply blocked both front and back reeds with tape –careful not to get adhesive on the tongue — to silence the reed. To properly fix this problem, I had to go deeper.

First I removed the stop action. It seemed firmly fixed and I could not find any screws, until I realized that it had been held in place with hooks! Easy, just slide them away and lift it out! An opportunity to clean it up.

None of the stops on my organ have any labels. But from other Uxbridge organs with 11 stops this is what they might have been (from bass to treble):

Then I removed the keyboard– two more hooks –one at each end–and also two vertical metal struts centre front and back, which had screws. Good opportunity for more cleaning.

Looking down on the keyboard it was obvious that the stop action had been translated through the keys with several vertical dowels that had been kept aligned by a strap of wood along the top of the keys at the back and fixed to the frame of the keyboard. A red felt gasket surrounded each hole.

Looking underneath the keys reveals the bushings — the pads that receive the key and the pads that run between the key and the “pitmans,” which are more vertical dowels or rods that go from the bottom of each key into the wind chest to push open the valves (pallets) under each key, allowing air flow through the reed. Those pads were in good shape, so I left them alone.

The couplers were in good shape too, though they were very dusty. When the couplers are engaged, pressing one note will allow another note to sound at the same time one octave either higher (in the treble) or lower (in the bass). They are turned on by two stops–one for treble and one for bass. Consisting of one bent metal rod for each note, they operate by pressing on a round cylinder located on the pitman of the higher (or lower) key. (I forgot to get a good photo of that. At another website, you can see good before and after pictures of couplers).

Now to open the wind chest. I was afraid to do this, afraid that somehow I would irreparably break a seal. It had been throughly screwed to the foundation board with long screws and washers through a gasket that seemed like heavy cloth adhesive tape. You can see one screw with a washer in the #8347 picture above. There were many! The screws at the front came up from below through the foundation board into the wind chest. The ones at back and sides, came down from the top.

With all the wind chest screws loosened, the holes in the foundation board became visible. These holes communicate the air flow from the bellows into the wind chest. 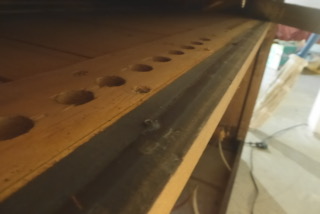 Every pallet has a little metal pin front and back to hold it in place and guide its movement up and down. Pallets have slits to slide over the pins and they have padding, in this case of soft kid, to ensure the seal over the opening. The kid was somewhat dirty but soft and pliable. I decided to leave all the pallets alone.

Aha! there’s the trouble! The D” pallet had been enthusiastically pressed down so hard that it popped off the guide at the front. Easy to pop back into place and re-centre the spring.

And another key –the top note– had also done the same thing. In this case you can see the bottom of the pitman sticking into the wind chest beside its pallet instead of being directly on top of it. Before moving the pallet into place, I had to push the pitman up out of the way.

All fixed. Now to put everything back, going in reverse order.

But first, ** to repair the broken dowels on the decorative piece of wood above the keyboard (whatever it is called). Unfortunately the broken-off, old dowels were still in the holes on the frame of the stop action. You can see one with dregs of a dowel in the upper left of the photo above of the stop action hook. We had to use a drill to get them out.

So far I have not had to do anything with the bellows or pedals, and I hope I never do.

The organ looks good, sounds fine, and is fun to play. The cute lamps came from Walmart!